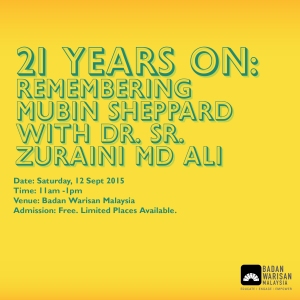 Tan Sri Dato’ (Dr) Haji Mubin Sheppard is a name synonymous with the conservation and preservation of historical buildings in Malaysia. Born in Ireland in 1905, he arrived in Malaya in 1928 to serve for the Malayan Civil Service (MCS) until 1963. Tan Sri Mubin’s love for history and Malayan heritage is evident from his numerous publications, his involvement as Editor and President of MBRAS, Museum Director as well as the founding of the Malayan Historical Society in 1953. He was instrumental in the founding of Badan Warisan Malaysia in 1982 and championed the conservation and preservation of Malaysia’s built heritage.

The Mubin Sheppard Memorial Prize was established by Badan Warisan Malaysia  to raise awareness among younger members of society, about the built heritage of Malaysia. 21 yers after his passing, Dr. Sr. Zuraini Ali celebrates his life and work and will share her insights on the tireless efforts and significant contributions of Tan Sri Mubin from the 1950s until his death on 11 Sept 1994.

Dr. Sr. Zuraini Md Ali is a professional in architecture and heritage conservation in Malaysia. Her PhD entitled ‘British Colonial and Post-Colonial attitudes to Architecture and Heritage Conservation in Malaysia’ references many works of Tan Sri Dato’ (Dr) Haji Mubin Sheppard. She begin her professional career in Built Environment as an Assistant Architect and in the 1990s taught at Federal Institute of Technology, Kuala Lumpur and MARA Institute of Technology. Dr. Sr. Zuraini was among the pioneering staff who established the Department of Building Surveying, Faculty of Architecture, Planning & Surveying in UiTM and currently lectures at Universiti Malaya’s Department of Building Surveying, Faculty of Built Environment. As conservationist, Dr. Zuraini has worked on projects including the restoration of Dewan Tunku Canselor, University Malaya (2002-2004) and restoration of Taman Sejarah Kusta Negara (Phase 1) Sg Buloh (2012-2014). She has received several recognition and awards in her research and consultancy works including Honorable Mention in National Heritage Awards 2004: Conservation with Adaptive Re-Use of Bargas Zakariah, Badan Warisan Malaysia in 2005.