Book Talk: The Writing of Contested Space: Learning to Read a City by Dr. Gwynn Jenkins

The Pangkor Story is a work in progress developed by Faisal and his team working closely with the Northern Corridor Implementation Authority. Originally developed as a training programme for the local taxi drivers to be Pangkor Island Guides, Faisal found that there were many cultural and heritage firsts in Pangkor that had to be documented. This has become the Pangkor Story – the Cultural Heritage Map of Pangkor Island. Want to learn about Frank Sinatra’s connection with Pangkor or who are the Kwantong in Pangkor?

Come join us and meet the team behind the project! 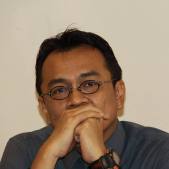 Faisal Abd Rahman is a sought after tourism and training expert and frequently gives talks on a variety of subjects. He has developed many modules for tourist guides, cultural heritage guides, and national service trainees. Currently, he is focusing on community-based tourism initiatives.

Legends of the Secret Tunnel of Malacca by Dennis De Witt 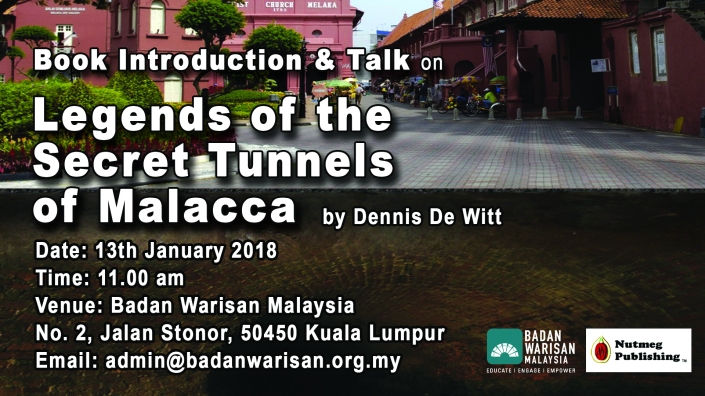 Dennis De Witt will share the tales of the subterranean tunnels under the historic town of Malacca that has existed for over a century. There were stories of a tunnel under St. Paul’s hill and how people had gone into these tunnels but were never to be seen again.

This talk will give an overview of the book. What secrets do the tunnels contain and why were people willing to risk their life by descending into the dark and unknown orifices below Malacca? Is there lost treasure still buried in Malacca? This book uncovers the layers of history that unfold Malacca’s most bizarre and amazing legend. He will share pictures of Malacca and the historic St. Paul where the tunnel is, some of which are featured in the book. A book sale will also be held after the talk.

Dennis De Witt, a management consultant in Kuala Lumpur, is a 5th generation Dutch Eurasian originally from Malacca. He has a keen interest in subjects relating to the history of Malacca and Dutch influences in Malaysia.

Over the years, he has participated, spoken and presented papers in various academic, private and public seminars and events organized by the Malaysian National Archives, and the Royal Netherlands Embassy in Malaysia, the Malacca Museums Corporation, the Institute of Occidental Studies at UKM, Taylor’s University Lakeside Campus, the Institute of Southeast Asian Studies and Universiti Teknologi MARA.

He also regularly conducts CTRE training for the Kuala Lumpur Tour Guides Association and speaks to the volunteers’ group at the National Museum. He has contributed articles for the Journal of Malaysian Biographies and written articles for various newspapers and magazines.

He has published several books, including ‘Reconnecting Through Our Roots’ (2006), ‘History of the Dutch in Malaysia’ (2007), ‘Melaka from the Top’ (2010), ‘Historical Tombstones and Graves at St Paul’s Hill Malacca’ (2016). In 2009, he was named the winner of the ‘Dutch incentive prize for Genealogy’ for his book ‘History of the Dutch in Malaysia’ and he received his prize in the Netherlands. He was the first-ever recipient of the prize who is not a Dutch citizen. His latest publication is entitled ‘Legends of the Secret Tunnels of Malacca’ was just released in 2018. 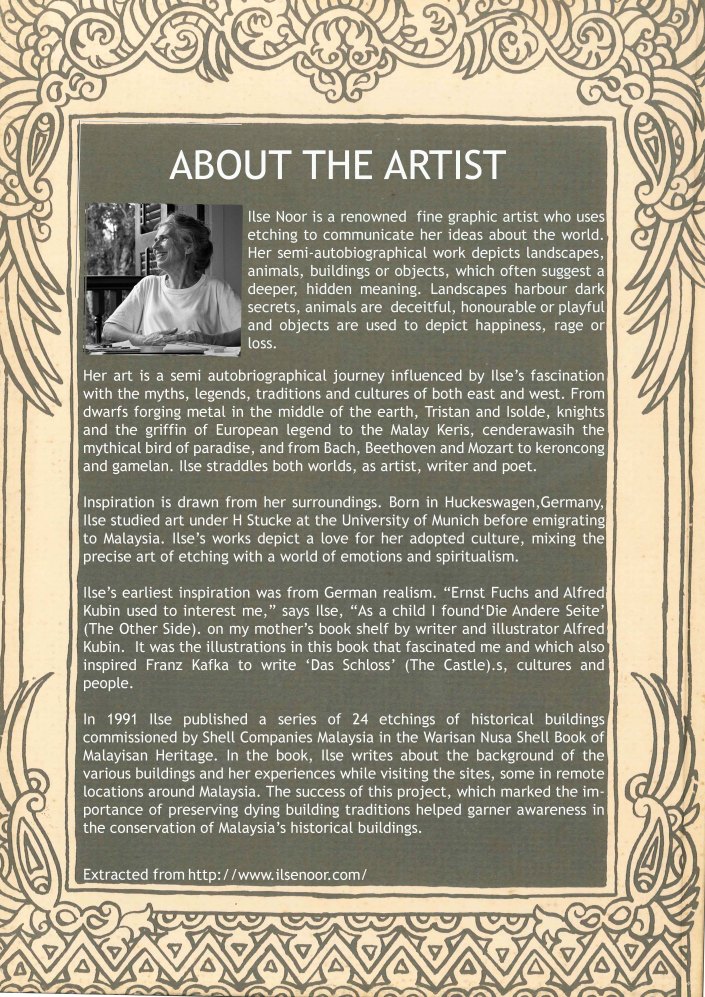 The habit of betel chewing is believed to have started way back into the Neolithic Age, and for a long time, it was thought to be native to India because of several literary references including a Pali text dating from 504 BC describing this practice. Recent linguistic studies and archaeological finds, however, point to another origin, i.e., southeast Asia.

This conclusion is based on the discovery of traces of the piper betel seeds found in various caves in Thailand and Indonesia dating back to 5,000- 7,000 BC and the discovery of a male skeleton with betel-stained teeth in the Duyong caves in the Philippines dating back to 2680 BC. This habit (betel chewing) spread to cover a large area which included mainland southeast Asia, the Indian subcontinent, Sri Lanka, Indonesia, Papua New Guinea and Micronesia and a custom which was enjoyed by both men and women.

Over the years several accounts of the habit have been written by countless travellers and writers including references to betel and areca in Chinese accounts which date back to the 7th century. They believed that the betel and areca had many medicinal qualities most popular being that of a mouth freshener and it was said that its popularity in China only declined with the introduction of opium in the 19th century. In the “The Travels of Ibn Buttute” in the 13th century he described how he was welcomed by a plate of betel leaves and areca nuts on arrival at the palace of the Sultan of  Mogadishu, clearly indicating its association with hospitality.

The foreigners were fascinated and at the same time repelled by the black teeth and the red saliva describing the habit as vile and disgusting, but the habitual users considered these very same things as beautiful.  Chewing betel which is a mild narcotic evokes a mild euphoria and a general feeling of well-being. The British anthropologist, Tom Harrison claimed that a few minutes of betel chewing after an hour of hard climbing in Sarawak sent waves of energy through his body.

There are three main ingredients necessary for betel chewing, the betel leaf (from the piper betel vine), lime (from limestone or crushed incinerated sea shells) and the areca nut. One starts with the betel leaf to which the lime is smeared, and a few slivers of areca nut added.  The leaf is neatly folded into a small parcel which is called a quid or a “chew” and then popped into the mouth between the gum and the cheek. The Malays add gambir as a fourth ingredient which is said to enhance the flow of saliva, but its primary export value was for tanning leather.  Tobacco and spices can also be added depending on taste and custom.

A receptacle was therefore required to house and transport the different ingredients mentioned above, and the Betel Box was born. This can be in the form of boxes, trays, baskets, and bags, fashioned out of silver, gold, brass, bronze, lacquer, wood, ceramic, glass, textile, etc. The shapes and sizes vary to reflect preference gradually becoming a status symbol to indicate the wealth and social standing of its owners.

The grandest usually made of gold were reserved for royalty, and this then became part of the royal regalia in countries such as Burma, Thailand and the Malay sultanates. Over time the popularity of betel chewing waned, and when Malaya became independent from the British in 1957, the betel box was excluded from the royal regalia because it was considered old-fashioned. What has remained is its association with respect and hospitality in Malay custom and tradition and the Betel Box, therefore, plays an important role especially in Malay weddings

From what was described as an “unlovely practice” by Sir George Scott we have fortunately been left with a very rich inheritance of beautiful Betel Boxes and the various wonderful paraphernalia which were necessary for betel chewing. These include the betel cutters, tobacco boxes, spittoons and mortars which the elderly and toothless needed to pound the ingredients.

Turtle Tales: Talk & Exhibition at Badan Warisan Malaysia is in conjunction with World Turtle Day! The exhibition will be on going for 1 month from 13 May to 13 June 2017 whereas the talk will be on 21 May 2017.

This month long exhibition features paintings and drawings from the book ‘ I love Sea Turtles’, a collaboration between sisters Yi Xuan, 15, the writer of the book and Yu Jing, 11, the illustrator of the book.

The paintings and book were created after the sister’s witnessed the sea turtles laying eggs, which then ignited the sister’s passion and dedication in helping to save these sea creatures.  The sisters will be at Badan Warisan Malaysia on 21 May to share their experiences and talk about their adventure and future projects.

The talk will take place on 21 May 2017, given by the Turtle Conservation Society of Malaysia. The talk will feature a presentation of the different species of sea turtles found in Malaysia, their conservation status, feeding habits and threats that they face.

Audiences will also get to know TCS, their objectives, the research, conservation, education and awareness programmes that have been conduct.

The talk will also focus on the two critically endangered species of fresh water turtles in Malaysia that TCS is focused on.

The talk focuses on how architecture can contribute towards the creation of an ‘imagined community’ called ‘Malaysian’ through a discourse of multiculturalism and democracy as the main reference points of design. Historically, the call for a national architectural identity was received with great interest by Malay architects who produced many traditional revivalist buildings and also by non-Malay architects with emphasis on climate and local materials. Neither of the two extremes had taken multi-culturalism and democracy into their design approaches and discourses. What we find are either simplistically interpreted post-modern attempts and at the other extreme we find literalist modernism products with a number of architects engaging in regionalism using climate and material in a more daring manner.

Although the regionalist in Malaysia has a better edge in terms of a more creative and meaningful design, their approach would be most inspiring if the aspects of multi-culturalism and democracy were integrated. Many architects either seemed too frightened of political backlash or they are uncertain how these two aspects can be used in architecture. I will concentrate on these two aspects of multi-culturalism and democracy in my criticism of housing, mosques and administrative buildings in Malaysia by reinterpreting the rituals and values within a more inclusive view of politics and society and the early modernist framework of design.

r Dr Mohamad Tajuddin Mohamad Rasdi is a prolific writer in architecture, politics, social issues, religious matters and education. Prof Dr. Mohamad Tajuddin was educated in the USA at the University of Wisconsin, Milwaukee where he obtained his Masters and Bachelor of Science in Architecture.

He was Professor of Architecture at UTM for 10 years and now at UCSI University. Professor Tajuddin has authored and published 40 books to date on architecture concerning Islam, the mosque, housing, community building and planning of administrative centres. He was a columnist for several years with the Utusan Malaysia and with The Star. Prof Tajuddin is also responsible for writing hundreds of articles in architecture for the encyclopedia of architecture published by the national publication.

He has written many articles in the media concerning various issues of architecture, democracy, multi-culturalism and education. He is also frequently interviewed by online media news like malaysiakini and Freemalaysiatoday on national political and social issues.

This entry was posted in Save My Heritage, Talks & Lectures and tagged Architecture, book, culture, History, Opinions, talk.

The Bugis Way of Life by Pn. Zuraidah Ghani 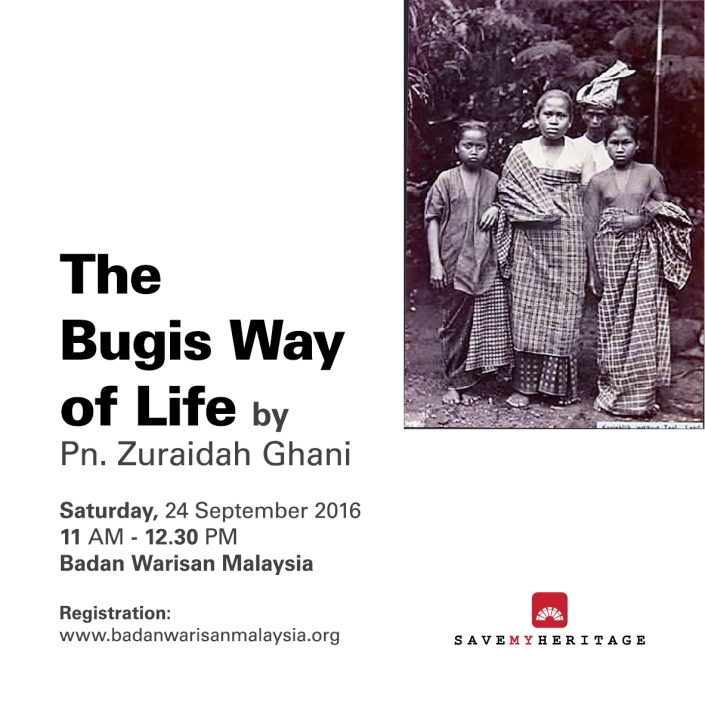 It took several years of research and two trips to Makassar and Sulawesi before Pn. Zuraidah could really feel that she now understands her Bugis identity. This talk will explore who and what the Bugis are- their history, beliefs and way of life.
About the speaker:
Pn. Zuraidah begin her interest in exploring her Bugis background 10 years ago. Born in Muar, Johor, she spent several years abroad before returning to Malaysia in 1997. Her book, ‘A Bugis Family’ is a result of her adventure and experience in documenting her native roots.