It is the responsibility of building owners to ensure the maintenance, management and care of their properties so they are in good condition, safe, comfortable to use and habitable.

We have many laws and guidelines which regulate this and there are penalties which can be imposed if uninhabited buildings are left to ruin, potentially raising concerns of public safety.

In the case of buildings such as the former FMS Survey Office which has been gazetted as “heritage” on the National Heritage Register, there may be additional regulations which are imposed by Jabatan Warisan Negara who are custodians of this Register.

While we may want to know who is responsible, or how this sad state of affairs has come about, it is more pressing to have an urgent action plan to bring the relevant parties together to stop further deterioration and put the building back in good repair. It would be timely for the responsible authorities to work with heritage NGOs and other stakeholders to initiate a management regime to prevent this from happening to other heritage buildings, especially public/government owned buildings. 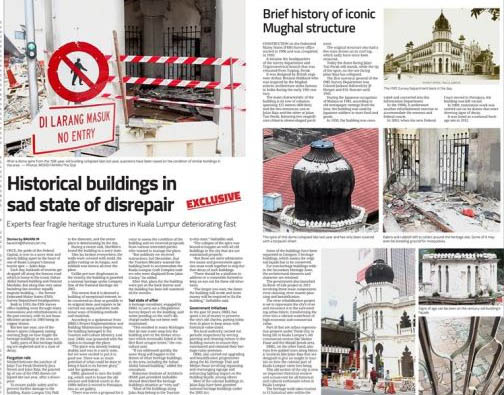 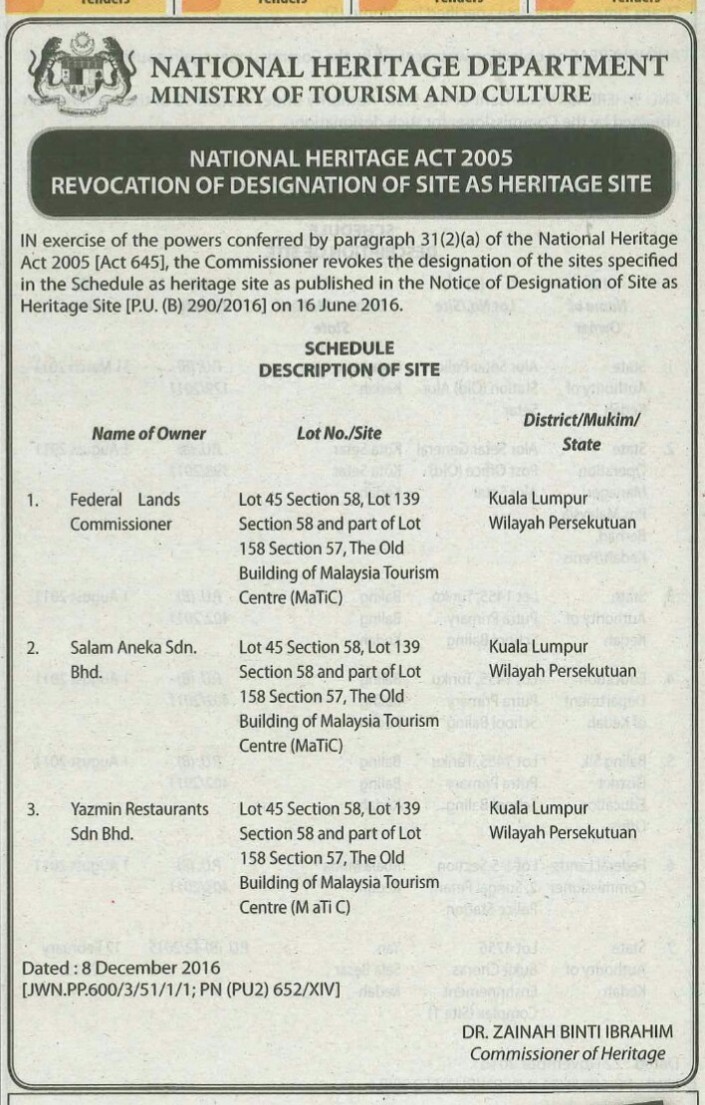 The notification in the NST on 28 December 2016 from Jabatan Warisan Negara (JWN) to revoke the designation of the “Old Building of Malaysia Tourism Centre (MaTIC)” as a heritage site raises many concerns and issues.

Law does not Provide for Revocation of Heritage Site Status

First, the section 31 (2) of the National Heritage Act 2005 (Act 645) which was cited in the Notice describes the process for designation of a heritage site. It does not deal with revocation of a gazetted site. And we understand that this site which comprises Lots 45 and 139 (Section 58) and part of Lot 158 (Section 57) was gazetted (Gazette Number P.U. (B) 290) as “Warisan” on the National Heritage Register on 16 June 2016. The criteria for listing specified in documents from JWN refers to its historical importance as well as its architectural and aesthetic character.

The National Heritage Act (NHA) does not have any provision for revocation of gazettal of a heritage site. Therefore, it would appear that unless the NHA is amended to allow for this, it is questionable if the Commissioner has the power to revoke a site which has already been gazetted; i.e. is this revocation ultra vires the Act?

Significance of the Heritage Site

Lot 45 is used as a car park which services the tourism centre.

There is a modern five storey building housing the KL Tourism Office on the part of Lot 158 which has been gazetted.

Lot 139 is by far the largest lot. There are several other buildings on this lot, including the house of wealthy business tycoon Eu Tong Sen and the Dewan Tunku Abdul Rahman. In keeping with the social standing of the owner Eu, many social activities were held in this house from the time it was built (1935) until the start of World War II. During WWII, it was used by the British, and then the Japanese army as a war office. In 1956, it was acquired and renovated by the government of Malaya, and in 1957, the installation of the first Agong was held there. In 1958 a conference hall, the first air conditioned hall in Kuala Lumpur, was added at the rear of the building.

In 1959, the first meeting of Parliament of the independent Malaya was held there. Following the building of the new Parliament House, by the early 1970s the original house and hall were converted to house the National Art Gallery for the next decade or so. In the 1980s and 1990s several new blocks were added; these include Saloma Bistro and retail stores serving visitors and tourists. In the mid 1980s, the conference hall was converted into a theatre. This ensemble of buildings that has served as the Tourist Information Centre for over 20 years is now known as MaTIC.

NHA and New Development Initiatives on a Heritage Site

Then there is the issue of new development on a heritage site. It is important to note that there is nothing in the NHA which precludes new development. As in the case of all applications for planning permission, owners will have to comply with guidelines and conditions imposed by the local authority – in this instance it will be Dewan Bandaraya Kuala Lumpur (DBKL). When it comes to gazetted heritage sites however, there will be additional guidelines and conditions imposed by JWN in line with provisions found in paragraphs 40, 41 and 42 of the NHA, all of which could potentially affect the scale and nature of the proposed development. This would include the provision of a 200 meter “buffer” from the site boundaries for any new development to mitigate against any (negative) impact on the heritage values of the gazetted building and/or site.

One could speculate that this revocation is to redress the fact there are no heritage buildings on Lots 45 and 158, and therefore the gazettal should not have covered these two lots, only Lot 139 which has heritage properties.  If this were the case, it would also beg the question why the Gazette in June 1026 included all three lots.

One would definitely expect a high level of rigour as well as resources in all endeavours to undertake the gazettal of any heritage site. The NHA provides for the process to include notification to the owner/s, an objection period, hearing and eventually, the decision to, or not to, designate a heritage site; and all along the way, there are clear steps to ensure the public are notified of these decisions in the printed press.  This process takes time, and it has been our past experience that JWN does not take this responsibility lightly.

Badan Warisan Malaysia believes it is critical to understand the implications and legal ramifications of this Notice to revoke the designation as heritage of MaTIC.

Due process of the law has to be followed for the future protection of heritage sites in Malaysia.

This entry was posted in In The News, Opinions, Save My Heritage and tagged heritage, Heritage sites, heritage status, History, kuala lumpur.