Talk on Memories of a Malaccan: A Pictorial Recollection of the 1920s to 1960s by Audrey Lim 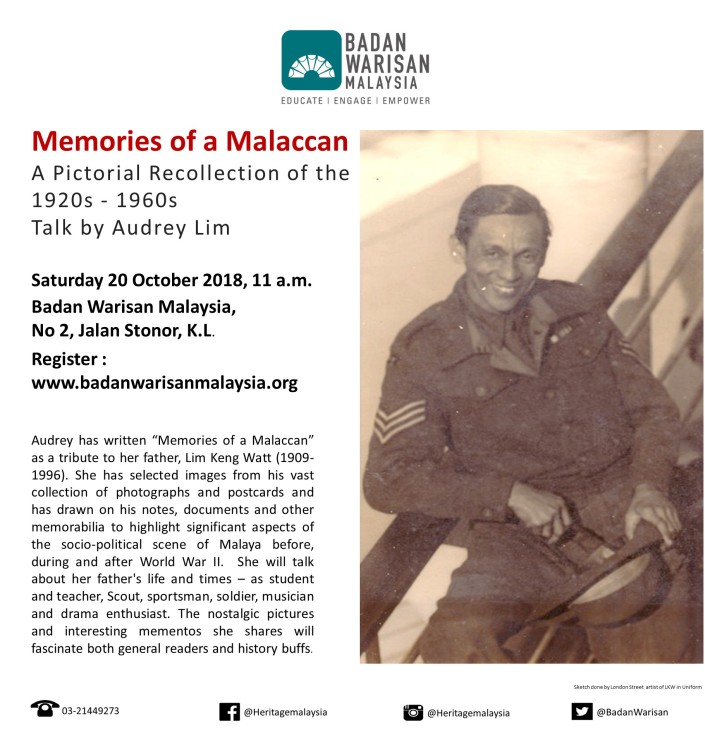 Audrey has written “Memories of a Malaccan” as a tribute to her father, Lim Keng Watt (1909-1996). She has selected images from his vast collection of photographs and postcards and has drawn on his notes, documents and other memorabilia to highlight significant aspects of the socio-political scene of Malaya before, during and after World War II.  She will talk about her father’s life and times – as student and teacher, Scout, sportsman, soldier, musician and drama enthusiast. The nostalgic pictures and interesting mementos she shares will fascinate both general readers and history buffs

Audrey Lim is a Founder-member of Malacca Theatre Group.  Has helped the MTG organise inter-school drama competitions.  Also acts and helps regularly in its productions.  Served as President of the MTG for 3 terms.  She wrote a book titled Write with Success originally published by Longmans, now revised and reprinted as Write It Right ; now in its 12th. edition.  Recently she wrote 2 short plays for the latest Malacca Theatre Group production Snippets held in November 2016, one of which was a historical but fictionalized play about her aunt who had been jailed by the Japanese during the Occupation, while the other Beauty and the Bard was in the finals of the Short and Sweet drama fest in KL.

This entry was posted in News & Events, Talks & Lectures, Uncategorized and tagged A Pictorial Recollection of the 1920s - 1960s, Audrey Lim, History, Malaya, Memories of a Malaccan, World War 2.