Archipelago: A Journey Across Indonesia 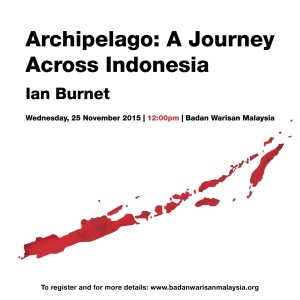 “Archipelago: A Journey Across Indonesia”

Indonesia is the world’s largest archipelago nation comprising as many as 17,000 islands spread over the same distance as Los Angeles to New York, or Perth to Sydney. Indonesia is also the most culturally diverse nation on the planet. Travelling by bus, plane, train, ferry, boat, car and motorcycle from Java to Timor, Ian Burnet sets out on a journey across the archipelago to discover this rich

“Archipelago: A Journey Across Indonesia” describes how the early Malays came to these islands and the influence of the Indian religions of Hinduism and Buddhism on the islands of Sumatra, Java and Bali. This book also explores the heritage of the Indians, Chinese and the Arabs, the rise of Islam and the introduction of Christianity to these lands.

Ian Burnet grew up in South Gippsland, Victoria, Australia and graduated with a degree in Geology and Geophysics from the University of Melbourne. He first went to work in Indonesia in 1968 as a young geologist and became fascinated by the diverse cultures and rich history of the archipelago. Ian Burnet’s book, Spice Islands, tells the 2000 year history of the spice trade from the Moluccas of Eastern Indonesia through China, India and the Middle East until the spices reached Europe. His second book East Indies begins in the port city of Malacca, and tells the story of the 200 year struggle between the Portuguese Crown, the Dutch East India Company and the English East India Company for trade supremacy in the Eastern Seas.

This entry was posted in Uncategorized.